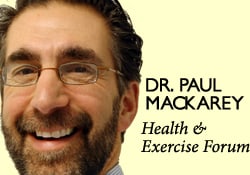 “Health and Exercise Forum” by Dr. Paul Mackarey, completes its 10TH year in June of 2015 …THANK YOU! Thank you for your kind words, positive (and negative) feedback in the form of phone calls, texts, emails and simple chats on the streets. I am grateful and humbled. In honor of the 10th anniversary of “Health and Exercise Forum,” I decided to write a series of columns that encapsulates the most important messages regarding health and wellness, base on current wisdom. Readers in NEPA seem to be consistently interested in is health, wellness and longevity. While I have written about this repeatedly, in many different ways, over the past 10 years, I thought this would be the perfect time to share some new information. Please enjoy and embrace the wisdom of those centenarians both from NEPA and from around the globe and let me know your thoughts.

Academics have long suspected that there are specific clusters of people around the globe who significantly outlive the general population. This concept provoked National Geographic Explorer Dan Buettner, to travel around the world in an attempt to study geographic locations around the world that had the greatest concentration of centenarians. He and his research team further studied their cultures and social habits to determine commonalities among these people and their habitats. He discovered that DNA is only one of many ingredients for a long and healthy life. His book, The Blue Zone, details his findings and here is a summary of what they found…

Buettner and his team identified five specific locations on the planet where people seem to have found the “secrets of a long life:” Sardinia, Italy; Okinawa, Japan; Nicoya, Costa Rica; Ikaria, Greece; Loma Linda, California. But, Buettner and his team were not just impressed with the age of the people they met in these zones, but the active lifestyle they maintained, even at 102 years of age. For example, he met a 94 year old man from Costa Rica, who continues to work as a farmer and a 102 year old woman from Sardinia, who hikes at least 6 miles every day. He designated these “Blue Zones” as special places where several common traits contributed to longevity; strong social structure, plant-based diet, moderate consumption of food and daily physical activity. Researchers hope that with lessons learned from the “blue zones” and their people, in combination with scientific discovery, technology and modern medicine, that other people can create their own healthy spaces, change lifestyles and live longer, healthier and happier lives.

From, National Geographic Explorer and New York Times best-selling author, Dan Buettner, author of , “Blue Zones” and “Power 9R,”assembled a team of medical researchers, anthropologists, demographers and epidemiologists to discover scientific support for the most common characteristics associated with a long and active life represented in all 5 blue zones. These nine common denominators are referred to as “Power 9R”and offer other people on the planet necessary information to create their own “Blue Zone,” to live longer, healthier, happier lives! This is what they discovered:

In conclusion, DNA is only part of the equation to live a long and happy life. You can create your own “Blue Zone” and exceed your life expectancy by adopting the “Power 9R” principles. Living in the stress and frenzy of the USA is not an excuse…as demonstrated by the Adventists, the average person’s life expectancy could increase by 10-12 years by adopting a Blue Zone lifestyle.

Paul J. Mackarey PT, DHSc, OCS is a Doctor  in Health Sciences specializing in orthopaedic and sports physical therapy. Dr. Mackarey is in private practice and is an associate professor of clinical medicine at The Commonwealth Medical College.